Most people have encountered examples of static electricity from an early age. Perhaps you have been shocked when grabbing a door handle or touching noses when you kiss someone. Maybe you have seen sparks in your cat’s hair while petting him. In school, you might have experimented by rubbing a balloon on your head and then watching your hair stand up as you lifted the balloon. All of these examples follow the same principles of the generation and discharge of static electricity.

In this article, we discuss problems associated with static electricity in industrial manufacturing operations and how to effectively address them.

At the atomic level, materials have a balance of positively charged protons in the nucleus and negatively charged electrons in the shell. Balance requires the same number of each. A static charge occurs when that balance shifts due to the loss or gain of one or more electrons from the atom or molecule. The primary mechanism for this loss or gain, among several possibilities, is friction. When two materials, similar or dissimilar, contact one another, even if the contact is slow or brief or gentle, there is friction between the adjacent surfaces. Electrons can be transferred, leading to an imbalance for the donor and recipient atoms or molecules. The separation of two surfaces previously in contact with one another can also result in electron transfer.

Some materials, called conductors, can easily pass along electrons, flowing from atom to atom. These materials, especially when in contact with a large conductive mass called a ground, can shed excess or quickly regain deficit electrons by conduction, rebalancing the charge to neutral. Non-conductive materials, called insulators, do not easily move electrons from one point to another. An imbalanced condition initially created by friction can persist for a long period of time, until some later mechanism introduces material that can accept or donate electrons. This can be a person, an object or path to ground, or an airborne particle.

Rebalancing can occur abruptly, such as the shock we have personally experienced. In an industrial setting, the rebalancing can result in all sorts of undesirable conditions. Small electronic pathways can be damaged. Raw materials and finished goods can become contaminated. Plastic webbing can cling to itself or handling equipment. Conveyed products can be repelled from one another, causing misfeed, misalignment, or drops. Operators can be discomforted or injured based on the severity of the shock. Further, the rebalancing can be incomplete or temporary, resulting in an accumulation of defects and unwanted conditions.

Some product forms include bars, fans, and nozzles. Each ionizer creates the ions and then propels them toward the target imbalanced material, using either compressed air or forced air from a fan. Once the ions come in contact with the undesirably charged material, electrons are traded, neutralizing the imbalance. The result of neutralized static is a more successful production operation and operator comfort. 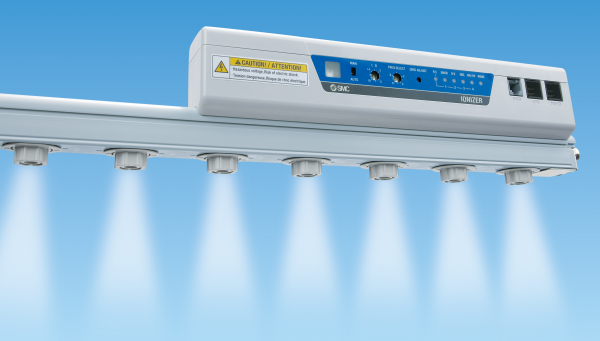 Bar ionizers, such as SMC’s IZS41, come complete with built in high voltage power supply and ion emitters, as well as user settings and feedback controls.

The presence of a static imbalance is generally obvious in a factory setting, although the underlying mechanisms may not be. It can be difficult to understand how to grasp the magnitude of the problem or arrange treatment. A basic troubleshooting outline can help direct the approach:

The failure mode is the evidence of a static problem, and identifying it usually requires the least amount of effort. It may be labels not adhering to a package. Perhaps an electronic component or assembly is not functioning properly during a quality check. Plastic webbing might cling to itself during travel over rollers. In some cases, plastic bottles jump off a conveyor line, or molded parts misfeed when exiting a hopper.

Non-conductive materials are the most likely to accumulate charge, and plastics are the most commonly affected in an industrial setting. Less obvious materials such as glass and natural fibers for textiles can carry a static charge. Different materials can be ranked into what is called the triboelectric series. On one end of the series are materials that favor excess positive charge. At the other end are materials that tend toward a negative charge. When two dissimilar materials contact each other, the relative distance between them in the series can predict the magnitude of the charge, or the likelihood a charge will be imparted. Having an awareness of the series can help to predict static issues and therefore take precautions. In existing conditions, the origin of the charge may be more easily pinpointed.

While observing potential processes causing static, pay attention to friction or separation, non-conductive materials, and the location of the failure mode. These factors will often point to the source of static. Sometimes a charge is acquired in one step, while the failure symptom is not observed until later. Packaging issues are generally apparent in close proximity to the charge-generating operation. Electronics, in contrast, may not show symptoms of static damage until a functional test is completed.

Describe the Optimal Outcome of Treatment

A reversal of production errors is typically all one would seek. Some operations may have differing degrees of tolerance for static. Setting a performance limit may lead to optimizing treatment any number of ways. Examples may be changing settings, adding another device, orienting the ionizer differently or relocating it entirely. On the other hand, if the installation is ineffective, it will lead to a reevaluation of the process.

As indicated above, multiple areas may be identified initially as requiring treatment. Some may be eliminated from consideration, depending upon the tolerance for failure. For example, dusty packages may be unsightly, but may not need to be cleaned until right before filling or labeling. As another example, handling friction may immediately generate more static, but an intolerable failure mode may not be present. Often, the ideal treatment location will be just before the next process changes the product’s state or direction.

Measure the Magnitude and Polarity of Charge

Handheld meters can verify the presence, magnitude, and polarity of charge. They are useful devices for both diagnosis and evaluation of treatment. Magnitude of charge is important because some static-induced behaviors will not abate until charge falls below a threshold. Polarity is important because some devices can create ions having an opposing charge. Treating with an opposing charge will reduce the static imbalance more quickly than treating with balanced ion generation.

There are different types of ionizers. Guns introduce ions to a triggered jet of compressed air. They are manually operated and typically used for cleaning. Nozzles are suitable for small targets, such as a surface intended for label adhesion, or small molded parts. The air shape is typically an expanding cone of air projecting past a single emitter.

Fans blow ambient air past multiple ion emitters, across a medium distance. They save energy because they do not require a compressed air supply and are convenient when the infrastructure is not present. However, ambient air is not as clean and may introduce contaminants. 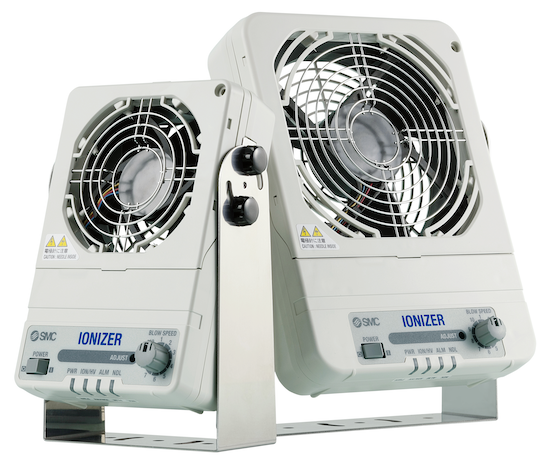 The SMC IZF Series fan ionizers use ambient air instead of compressed air to distribute neutralizing ions across a medium distance.

Bars create a long curtain of ionized air and are suitable for covering a long or wide target area. Multiple lengths are available, with the number of emitters and air jets dependent on bar length. They can be positioned longitudinally or transversely to the target object’s path, depending on the time required to reduce the static magnitude below the desired threshold. Remote ionizer bars like the IZT40 from SMC come in multiple lengths and create a long curtain of air to cover a long or wide target area. These ionizers separate the power supply and controls, allowing them to be installed in tight spaces.

Install and Orient the Ionizer

Proper orientation ensures the generated ion stream covers the intended area. There may be limitations due to machine structure, but the nearer the ions are generated to the unbalanced material, the more quickly it will be rebalanced. With improper orientation, the ions may wander off, may be siphoned off by adjacent grounded objects or may recombine with ions of opposite charge before reaching the target. Placing an ionizer with compressed air purging closer to the target may allow a decrease in purge pressure, which will be an energy savings.

Fan ionizers may have speed settings. Lower fan speed will be quieter and less disruptive to loose items. Higher speed will provide faster neutralization and a greater coverage area. Bar ionizers will have a greater range of controls. Ion polarity, pulse frequency, and balance may be adjustable. Some bars have alarms with sensitivity settings for emitter cleaning. Purge air pressure can be adjusted for bars and nozzles.

Observe Treatment and Compare with Expectations

Since ions are invisible, it is useful to measure the output to confirm ion generation is operating. Observation of the target process will confirm how effective treatment is. Observation and comparison comprise the feedback loop that leads to satisfaction or optimization. Fast-moving targets, such as web feeds and conveyed packages, may not be exposed to treatment long enough to eliminate static. Additional or reoriented ionizers may be required. Controls may need adjustment. If results are satisfactory, reducing purge pressure might be permissible for an energy savings. Alternately, production rates may be increased.

Daniel Rebennack has worked in the automation industry for nearly 30 years in various capacities. Most of his initial work was in design and process engineering. Pneumatics became his focus after joining SMC 19 years ago. At SMC, he has held positions as a Design Engineer and Product Manager.

About SMC Corporation of America

SMC Corporation of America is a part of a global organization that supports customers in every industrialized country and is the U.S. subsidiary of SMC Corporation based in Japan. Since its establishment, SMC has been a leader in pneumatic technology, providing industry with technology and products to support automation based on the guiding principle of “contributing to automation labor savings in industry.” Over the past 50-plus years, SMC’s products have become established as a recognized international brand through sales, technical, supply and after sale services in world markets.